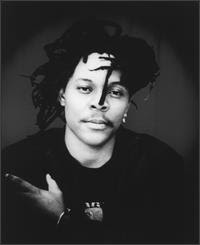 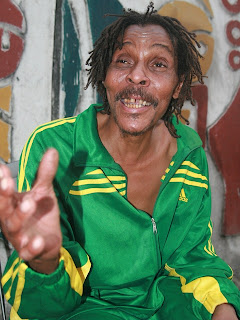 Veteran reggae artist, Majek Fashek is a shadow of his former self, the once handsome looking,bubbly fellow  is now in a pitiable condition.

He is now mentally unstable and sources say he is already in rehab but from a recent report,the little patience crooner is not getting any better. he was spotted last Friday at Ogba, Ikeja Lagos clutching his guitar, staggering with a cigarrette in his mouth, murmuring incoherent words.


Majek resides in Egbeda, Sewage area of Gowon Estate, and according to a neighbour, she said;


"Fashek is gone, I'm not sure any kind of rehab will bring him back. He messes up in the estate; he drinks and staggers around with crowd gathering around him. He's dried up. He has body guards and a deep blue jeep, but most times, I think he sneaks out of the house and ends up misbehaving. The first time i saw him, I thought he was a mad man. He's gone!"

The cause of majek's condition is none other than his addiction to marijuana,cocaine and alcohol (3 of the most dangerous hard drugs in the world).

Sometime in 2012, i heard he got a music deal of N15 million naira and was scheduled to release an album...no one has seen any album or heard any single but from the look of things, all did not go well.

I only pray he recovers and God help him, he quits hard drugs otherwise Nigeria might lose another musical gem.